The Emerging Leaders committee invites you to join the ISPE Canada Book Club for our September meeting with the theme of self-improvement. We will be reading “Noise” and go through a revolutionary exploration of why people make bad judgments and how to make better ones—”a tour de force.” The book concerns ‘noise’ in human judgment and decision-making.

This event is open to both experienced and young professionals. Join us even if you haven’t read the book. All you need is a love of reading and an open mind!

Noise helps create errors in many fields, including medicine, law, public health, economic forecasting, food safety, forensic science, bail verdicts, child protection, strategy, performance reviews, and personnel selection. And although noise can be found wherever people make judgments and decisions, individuals and organizations alike commonly ignore its role in their judgments and their actions. They show “noise neglect.” With a few simple remedies, people can reduce both noise and bias, and so make far better decisions. Noise explains how and why humans are so susceptible to noise in judgment — and what we can do about it.

Virtual – Zoom link will be sent with your registration confirmation. 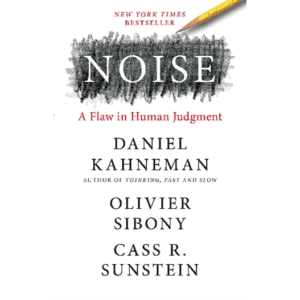 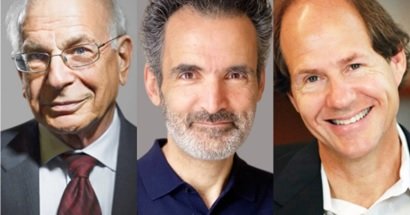 Daniel Kahneman: Daniel Kahneman is Professor of Psychology and Public Affairs Emeritus at the Woodrow Wilson School, the Eugene Higgins Professor of Psychology Emeritus at Princeton University, and a fellow of the Center for Rationality at the Hebrew University in Jerusalem. He has held the position of professor of psychology at the Hebrew University in Jerusalem, the University of British Columbia, and the University of California, Berkeley. He has been the recipient of many awards, among them the Distinguished Scientific Contribution Award of the American Psychological Association (1982) and the Grawemeyer Prize (2002), both jointly with Amos Tversky, the Warren Medal of the Society of Experimental Psychologists (1995), the Hilgard Award for Career Contributions to General Psychology (1995), the Nobel Prize in Economic Sciences (2002), and the Lifetime Contribution Award of the American Psychological Association (2007).

Olivier Sibony: Olivier is a Professor of Strategy at HEC Paris. He is also an Associate Fellow of Saïd Business School at Oxford University and has taught at London Business School, Ecole Polytechnique, ENA, IE Madrid, and other institutions. Previously, he spent 25 years with McKinsey & Company in France and in the U.S., where he was a Senior Partner. There, he was, at various times, a leader of the Global Strategy Practice and the Consumer Goods & Retail Sector.

Cass R. Sunstein: Cass R. Sunstein is the Robert Walmsley University Professor at Harvard. He is the founder and director of the Program on Behavioral Economics and Public Policy at Harvard Law School. In 2018, he received the Holberg Prize from the government of Norway. In 2020, the World Health Organization appointed him as Chair of its technical advisory group on Behavioural Insights and Sciences for Health. From 2009 to 2012, he was Administrator of the White House Office of Information and Regulatory Affairs, and after that, he served on the President’s Review Board on Intelligence and Communications Technologies and the Pentagon’s Defense Innovation Board. Mr. Sunstein has testified before congressional committees on many subjects, and he has advised officials at the United Nations, the European Commission, the World Bank, and many nations on issues of law and public policy. He serves as an adviser to the Behavioural Insights Team in the United Kingdom.

How does the ISPE Canada Book Club work?

The book club is run by our amazing hardworking volunteers. Books are selected based on participant interest and relevance to career and professional development. Sessions are hosted via zoom so that members across Canada can discuss and connect on the book together.

How to get the Book?

Do you read the book before the scheduled meeting?

There is no requirement to finish (or even start) the book prior to the meeting. During the meeting, most members will have finished the recommended chapters and we will be discussing them, so be prepared for spoilers if you haven’t read them yet.

How do I prepare for the meeting?

1-2 weeks before the scheduled meeting, we will send you a list of discussion questions to consider. As a group, we will discuss and look into these themes, questions, and topics further during the meeting.

What type of books do we read?

We’re open to anything that our members are interested in relevant to career and professional development. Approximately every 6 months we will send out polls to select upcoming books.

Am I eligible to join?

Open to all ISPE Canada members; there is no cost to join.

How often do we meet and for how long?

Meeting dates vary depending on the availability of the facilitators. Upcoming Book club meetings will be posted on the ISPE Canada Website. Cancellations and/or date changes will be notified to participants beforehand. Typically, the meetings will run for 45mins during weekday evenings.

Are there any in-person meetings?

At the moment, sessions are currently hosted via zoom so that members across Canada can discuss and connect on the book together. We also encourage members to host their own discussions before or after in order to dig deeper into the themes.